What Is The Most Important Survival Skill?

Learn The #1 Outdoor Survival Skill You Need To Survive Anywhere

What is the most important survival skill?

The most important survival skill everyone should master is NOT…

Sure, those are some “sexy” survival skills and they may come in handy at times.

But the #1 outdoor survival skill is actually a really simple skill that anyone can learn quickly and easily. This skill is so important, it will get you home alive more often than most other survival skills combined.

Enough already! What is it? To find out, let’s consider 3 real-life survival experiences and how they showcase the importance of this (super secret) skill.

3 Stories That Reveal The Most Important Survival Skill

Below are three stories of survival, and each of these situations...

So what skill is the common thread among these (and most survival stories)? What skill helped them make it out alive, or when not done, made their situation worse?

See if you can spot it.

Two young hikers got caught in bad weather after summiting a 14er (a 14,000 ft or taller mountain) in Colorado. Fortunately, they prepared by letting their family know where they were going. And they brought along a way to contact their family when things went south.

However, they weren’t prepared with the right gear and spent nights on the mountain without a way to make fire or stay warm.

Story 2: An experienced climber on a day hike

Shuei Kato is an experienced climber who got lost while on a day hike. He ended up spending 3 ½ days in the mountains.

Even though he planned a day hike that would last about 8 hours, he was prepared with extra food, clothing, and a stove. As a result, he was able to keep moving and stay warm while trying to find his way to safety.

Story 3: A fisherman taking a few minutes to find some grasshoppers

For Mike Vilhauer, a short walk in the woods to get some grasshoppers for bait turned into a 5-day fight for his life.

Would having been prepared with a better knowledge of the local area helped him avoid getting lost? Would a few simple preparations like carrying some water, snacks, or a compact survival kit have made his ordeal not so serious? Probably.

Preparation. It is by far the most important outdoor survival skill to master.

I know what you're thinking. It’s true...preparation isn't "cool". It's not as rad as being able to light a fire with a bow drill or hunt big game with an atlatl.

But preparation will get you home alive. Isn't that what survival is all about?

Here's the "cool" part: proper preparation will allow you to explore the outdoors with confidence, knowing you are ready for any situation you might encounter. And that's pretty rad. 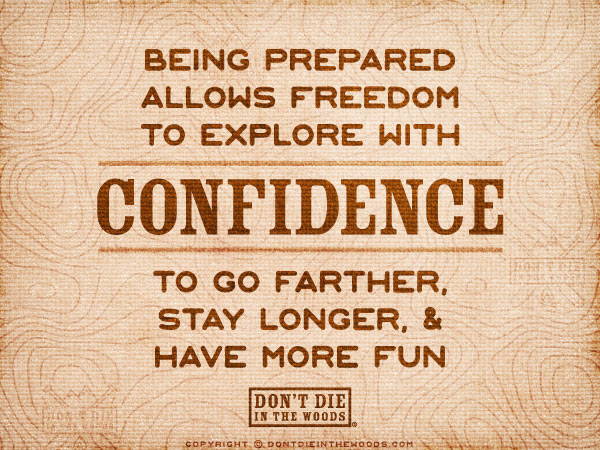 Let's explore this mother of all survival skills and learn how to prepare for outdoor survival.

What Is The Most Important Survival Skill?

Why preparation is the most important survival skill

How to prepare for outdoor survival situations

Why Preparation Is The Most Important Outdoor Survival Skill

So why is survival preparedness so important anyway?

When most people think of survival skills, they think of skills that’ll help them get out of emergency situations.

Example: You’re lost in the woods, it's cold, and you're underdressed. You have no drinking water, no fire starter, no shelter, no idea where you are. Most would think... “Well, you better know how to build a shelter with tree branches, make a bow drill to light a fire, boil water without a pot, trap some wild game, and navigate with the sun and stars.”

It’s true, those survival skills can at times come in handy. But with just a few simple preparations, you’ll probably never ever need to use most of those skills.

Example: You’re lost in the woods, it's cold, and you're underdressed. You think... "Well, this kinda sucks, but at least I'm not gonna die. Glad I put in the extra time this morning to come prepared for something like this."

When something unexpected happens, preparation keeps a desperate situation from becoming, well...not so desperate. 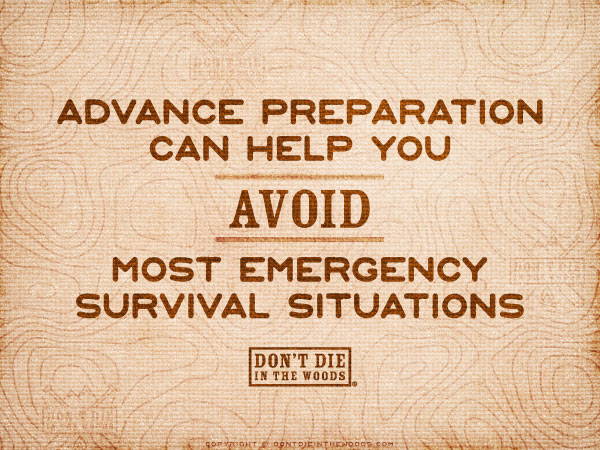 Yes, we know...you won’t have as many "cool" survival stories to tell, and your dreams of reenacting your own version of Man vs. Wild will likely never come true.

But remember the "cool" part about preparation: when you're prepared, you can have more fun, push yourself a little further, and explore the outdoors with confidence.

Ok, so you want to be prepared. Where do you start?

How To Prepare For Outdoor Survival Situations

So while you’re at home getting ready for your next outdoor adventure, get into the practice of…

Practice being prepared every day

But don’t just do those things when planning outdoor activities. Practice being prepared for sticky situations in everyday life.

Get used to being prepared for surviving everyday life and you’ll be better prepared to survive in the outdoors.

Prepare these 4 areas to survive in the woods

So what are some specific things you should prepare every time you head outdoors?

Here are four areas to consider. These are not hard and fast rules, but rather principles you can apply to almost any situation.

Your mind can be your strongest ally or your fiercest enemy. It can help you make clear decisions when the stakes are high. Or it can cause you to panic at the first sign of trouble.

Prepare your mind to make it your ally in tough situations.

Like we mentioned before, preparation starts at home. Preparing your mind starts before you ever find yourself in a wilderness survival situation. It starts in everyday stressful situations.

S.T.O.P. When You Feel Stressed

Try this: The next time you’re faced with an unexpected stressful situation (your boss hands you a pink slip, your car breaks down, etc.) practice the old Boy Scout acronym – STOP. 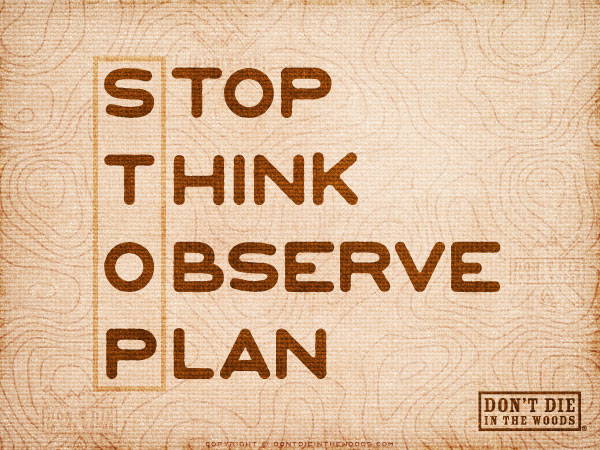 Shuei Kato did this at one point after realizing he was lost.

He was descending Missouri mountain in Colorado. It should’ve been 4-hour hike back to his car but snowfall had covered over his tracks. He spent about an hour trying to find which way he’d come up the mountain.

When he realized he was lost, he came up with a plan. He tried to establish where he was and then, based on his knowledge of the area, determined the general direction he should go to reach the trail.

It’s interesting what he said later:

“All kinds of negative thoughts come down when you stop thinking, or when you stop moving...I thought about it, that I might be done. But I’m like, ‘I’ve got to survive. If I’m out of options, I’m dead, so I’ve got to always come up with new options and possibilities for what can I do.’” - SummitDaily

Prepare your mind for outdoor survival by practicing STOP in everyday life. Then, when you’re faced with a backcountry emergency situation, it’ll be second nature. Like Shuei Kato, instead of giving up, your mind will be your ally helping you implement a plan to survive.

Preparing your knowledge of the area you are visiting is critical to knowing what gear to pack and what dangers you might encounter. It can help you find your way if you get lost, find help if you need it, and avoid many emergency situations all together.

Learn general info about where you're going

Start by getting a general feel for the area during the time of year you will be visiting. The government website for the area is usually a good place to start. Some good questions to research are...

Stay up to date on current conditions

Research maps of the surrounding area

Don’t assume that because you’re relatively close to civilization there’s no way you could get seriously lost.

Remember the fisherman searching for some grasshoppers?

Mike Vilhauer was fishing at a lake in California. He took a hike to get some grasshoppers for bait and ended up spending 5 days in the wild.

Was he 50 miles from the nearest road? Nope. Mike had actually driven his vehicle right up to the lake where he set up camp and was fishing. There were well-traveled dirt roads in the area and a town just 7 miles away.

It’s easier than you think to get turned around and lost, even in areas relatively close to civilization.

So don’t forget to prepare by learning about the area you’ll be visiting. It’s worth doing even if you’ll just be grasshopper hunting.

Bring the right gear (and backups)

Every time you go outside, make sure you have the the 10 essentials in your backpack. This simple step will prepare you to survive most emergencies without needing to know any advanced outdoor survival techniques.

In addition to the 10 essentials, use the information you gathered while preparing your knowledge to prepare your gear list. Try to predict the most severe conditions you might encounter and make sure you have what you need to survive.

If you're backpacking, remember to take survival essentials with you on day hikes.

Remember the two avid hikers climbing the 14er? After summiting, they started their way back to camp. But fog and a snowstorm changed those plans and they ended up spending two nights on the mountain.

According to the Denver Post, “They spent Tuesday night under another overhanging rock to protect them from the elements and tried to use batteries from a headlamp to start a fire. But that didn’t work. Their lighter was too waterlogged and they didn’t have all-weather matches. They had left their sleeping bags and other provisions at a base camp, thinking they would not be spending the night.”

Having been better prepared with a reliable way to make fire (waterproof matches, a waterproof lighter, or a simple ferro rod fire starter) and a survival shelter or emergency blanket would’ve made those cold nights on the mountain a lot more bearable!

So think...what gear is essential for your survival? Don’t forget it.

And then plan a backup.

Be prepared with the essentials (+ backups for the essentials) and uncomfortable situations will be less likely to develop into life-threatening emergencies.

Learn more about the 10 Survival Gear Essentials you need to bring with you every time you step on a trail. 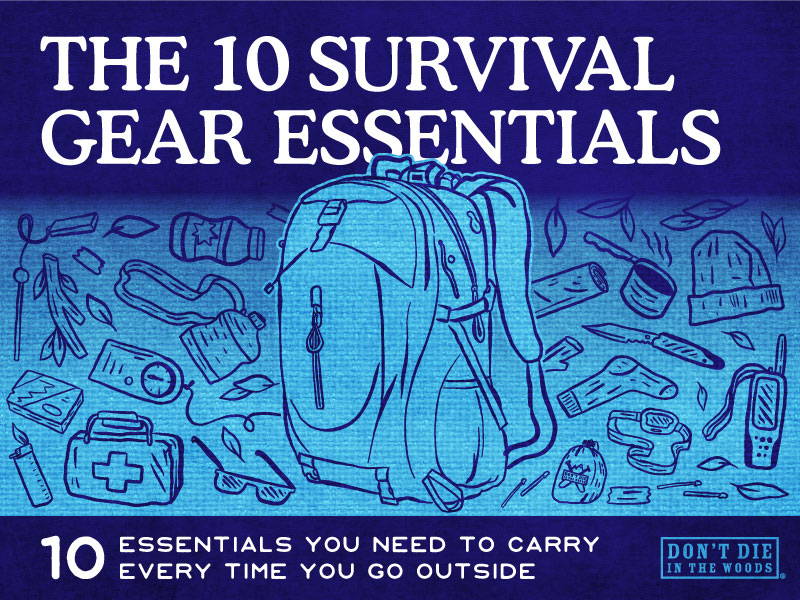 Keep your gear in good condition — you’re depending on it

It’s important to take care of your stuff, from your hiking boots to your headlamp. Do that and it’s less likely to break when your life’s depending on it.

Some things you might do when prepping for a backpacking trip: 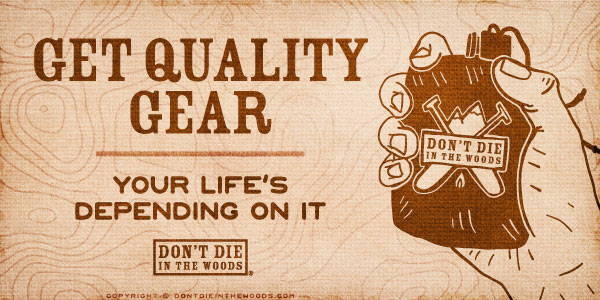 Now the fun part! Start by learning some basic survival skills, like:

Then...get out there and practice!

Be Prepared - Don't Die In The Woods

Preparation. It’s the humble outdoor survival skill that’s most likely to save your life.

So don’t forget to start your preparation at home. Remember to prepare:

Do that and you’ll be prepared to not die in the woods.

Caught With Your Pants Off